Elvis Presley and the Memphis Mafia

The group of friends around Elvis became known as the Memphis Mafia. A newspaper reporter tagged the group with this name during the time Elvis required them to wear dark, Mohair suits to give a respectable appearance. The guys never objected to the name, Elvis thought it was quite funny, because among themselves they referred to the group as the Guys.

New men would become part of the operation, and through the years some of those who had been around would leave and do something else. It was a changing group, but the group would remain loyal to Elvis all his life. For a brief description of those who spent a portion of their lives as employees and friends of Elvis Presley:- (Click links for interviews and/or more infomation).

Marty Lacker went to the last year of high school at Humes High with Elvis and Red West. He was the co-best man at Elvis' wedding. He was also the Foreman of the Memphis Mafia for a number of years, (Elvis' right hand man). He was solely responsible for the Memphis City Council to rename Highway 51, that runs in front of Graceland, Elvis Presley Boulevard in late1971. He was responsible for Elvis recording at American Studios in 1969 that basically brought Elvis back to the top of the charts. He was close to Elvis from 1957 until he died in 1977.

Gene Smith - was Elvis' cousin, they grew up together and had a close friendship. In the early days, Elvis would turn to Gene for a traveling companion, Gene went everywhere with Elvis. Gene was probably the closest to Elvis for the first few years. In 1962, Elvis and Gene had a misunderstanding and parted company, but in later years, Gene would visit Elvis at Graceland.

Junior Smith - Also Elvis' cousin who was disabled during the Korean War, one morning Elvis got a call that Junior had died. Elvis who was extremely fond of Junior took the news quite badly.

Billy Smith - Another cousin, Bill was the youngest of the boys. Billy was Elvis' favorite. Elvis would often say he wanted to be sure Billy grew up to be a good man. Elvis was not disappointed, Billy was Elvis' constant companion and his affection and loyalty was obviously right to the end of Elvis' life.

George Klein - Elvis and George graduated at Humes High School in 1953. George was always nice to Elvis and Elvis never forgot a friend, very early in Elvis' career he asked George to travel with him. Later George went into radio and became one of Memphis' most popular Disc Jockeys. George remained very close to Elvis until the end. Elvis once said, 'George will be my friend forever'.

Bobby 'Red' West - he was a School mate at Humes where he was a All-Memphis football player. Red helped Elvis out of a few situations with the so-called tough guys in high school. Elvis never forgetting Reds kindness, he asked Red to travel with him. Red not only went along as a friend, but a driver and Elvis' security man. Red also worked as a stuntman and actor in Elvis' pictures. Red developed a talent for songwriting and wrote songs which Elvis and other artists recorded.

Lamar Fike - 1957 left Texas and showed up at Elvis' home Graceland. He followed Elvis and the guys to Los Angeles and has been with them ever since. Elvis and Lamar got along with one another, they had their jokes and got mad at one another a lot, but the madness would last at most a day-and-a-half and then they would be back to the jokes. Lamar left Elvis in 1962 and become road manager for Brenda Lee for awhile, later he became manager of the Nashville office of Hill and Range music, then he returned to work for Elvis and at the same time he became manager of two country singers. Lamar was with Elvis until the end.

Alan Fortas began working for Elvis just before he went into the army and continued with Elvis after his discharge. Alan was in charge of transportation before becoming foreman of the ranch in Mississippi, he remained there until the ranch was sold. In 1968 Alan left the group, but he and Elvis remained close friends.

Joe Esposito - from Chicago, Elvis met Joe while in the army, Elvis asked Joe to work for him after they were discharged. Joe would soon become foreman of the guys. Joe worked with the books, paid personal bills and coordinated activities between Elvis and Colonel Parkers office. Joe was Elvis' right-hand man until he left for a brief time in 1964. When Joe returned the duties and responsibilities were also shared with Marty Lacker. Marty and Joe also shared the joy and honor of being Elvis' best man when he was married.

Charlie Hodge also met Elvis in the army days, their common interest in music brought Elvis and Charlie together. Charlie worked on stage with Elvis and remained with him all of his life.

Sonny West, cousin of Red, met Elvis in 1958 and joined the group in 1960 and became part of the security force. Sonny being a big man could always take care of himself, he also became a stuntman in Elvis' movies, as did Red, he did fight scenes with Elvis, Sonny also starred in two of his own pictures, and while on Elvis' tours he did advance work with Colonel Parker by going into each city a day ahead of the group and set-up security.

Ray 'Chief' Sitton was apart of the group for a few years. Ray would often be at the gates of Graceland, before he was hired by Elvis. Ray is a huge man, not one to be missed in the crowd among the fans, always at the gates of Graceland. Elvis became accustomed to seeing Ray at the gates and would say 'hi Chief how's it going to-day?' Elvis would call everyone he didn't know 'Chief'. One night Chief stopped one of the guys and asked if he could come up to the house and see Elvis. When it was mentioned to Elvis, Elvis said, 'who the hell is Chief?' Chief was brought to the house, that's how Ray got a job and all the guys called from then on Ray Chief.

Richard Davis in 1962 went to Seattle where Elvis was filming, 'It Happened At The Worlds Fair'. Elvis liked Richard and asked him to stay on, during that time Richard was in charge of Elvis' wardrobe. In the early seventies Richard left and went into promotion in the music business.

Mike Keeton in 1964 briefly worked for Elvis. Elvis and Mike attended the same church, Elvis always retained a strong feeling for the Assembly of God church.

Jerry Schilling, a young man who first met Elvis in 1964, Jerry began working for Elvis that year and soon became a good friend. Jerry had a manner Elvis liked, but at times Jerry's liberal views got him into miner disagreements with Elvis, however; Jerry and Elvis remained close friends until the end. Jerry left Elvis' payroll to become an actor, but soon become road manager for various recording artists, including Billy Joel. Currently Jerry is road manger for the Beach Boys.

Marvin 'Gee Gee' Gambill began working for Elvis about twelve months after he married Elvis' favorite female cousin, Patsy Presley. 'Gee Gee' a happy-go-lucky guy easily made friends with Elvis. Marvin was in charge of Elvis' wardrobe while he worked with the group. After a few more years on the road, 'Gee Gee' settled in Memphis with wife Patsy and their two children.

Dick Grob, a sergeant in the Palm Springs police force in 1969, Dick began accompanying Elvis as a member of the security force. Three years later, Dick quit the police force and worked full time for Elvis, Dick was with Elvis until the end. Dick lives in Memphis with his wife and three children.

Rick, David and Bill Stanley, are the three sons of Dee Presley, former wife of Vernon Presley. In 1960 they arrived at Graceland, the boys were only little, as they grew older they would be with Elvis on his tours as his personal aides. Ricky and David Stanley were with Elvis until he died. 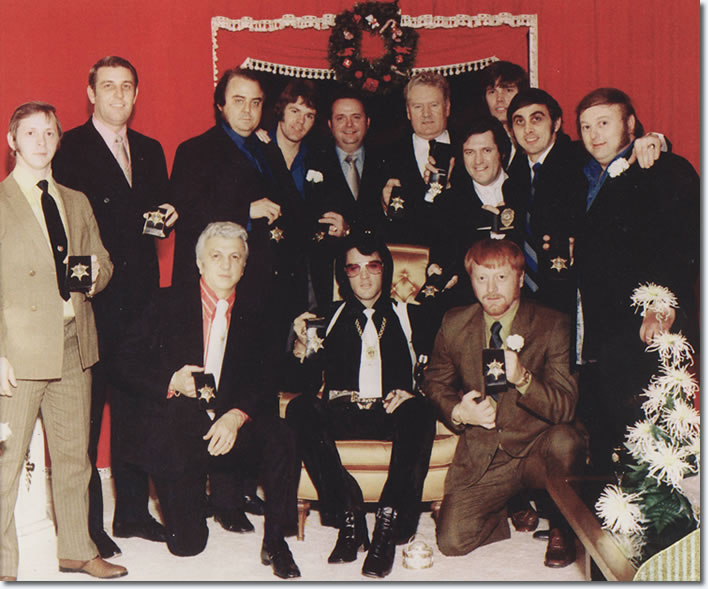 Al Strada came on the scene in 1972 in California. Elvis hired him to guard the house at night while Priscilla and Lisa Marie were there, and Elvis and the guys were on the road.

Dave Hebler was an expert in karate and a teacher when he first met Elvis in 1972, soon after, Dave joined Elvis' payroll and became part of the security force.

Sam Thompson met Elvis through his sister Linda, Elvis' long time girlfriend. Sam was a former Sheriff's Deputy in Memphis when he went to work for Elvis also as part of the security force. Sam remained until the end, and now he is with the Shelby County Sheriff's Department.

Throughout the years, Elvis, for brief periods of time had a personal hairdresser travel with him, Larry Geller and Sal Orifice would fill that role. When Elvis was in Los Angeles, Patty Perry Gerson, a long time friend and talented hair stylist, was called to do the job. Pat was often a guest at Graceland and a good friend to Elvis and the guys. Pat today remains a hair stylist in Beverly Hills.

Its incredible that the more than twenty men who worked for Elvis, who also ate together, lived together and played together, no one was seriously hurt, as they would have their moments with one another, but also being a large group they would often keep things to themselves to avoid an argument.

Elvis wouldn't tolerate a troublemaker, he would get rid of him fast, equally Elvis couldn't stand, and even hated any one who would lie or steal.

Buy The TCB Gang : The Way It Was (The Untold Stories) DVD

James Burton : First Call For The Royalty Of Rockabilly

Never before have we seen an Elvis Presley concert from the 1950's with sound. Until Now! The DVD Contains recently discovered unreleased film of Elvis performing 6 songs, including Heartbreak Hotel and Don't Be Cruel, live in Tupelo Mississippi 1956. Included we see a live performance of the elusive Long Tall Sally seen here for the first time ever. + Plus Bonus DVD Audio.

This is an excellent release no fan should be without it.

The 'parade' footage is good to see as it puts you in the right context with color and b&w footage. The interviews of Elvis' Parents are well worth hearing too. The afternoon show footage is wonderful and electrifying : Here is Elvis in his prime rocking and rolling in front of 11.000 people. Highly recommended.

Where do I go from here?